January 03, 2010
One of the things my hubby bought me for Christmas was some soluable aida for my cross stich. Something I have been after for a while. One of my magazines (I have dozens of cross stich magazines) has some lovely designs for baby clothes, and there are plenty of other patterns I can use for the same sort of thing. 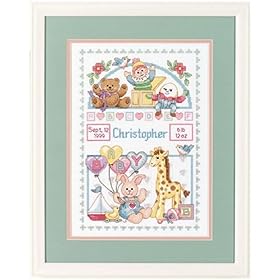 I have also made a start on the birth record I bought for Squiggle. It's by the same designers as the one I made for Jack so they will look really good together too.

But I fancy trying something more than just my cross stitch, and there is a crochet magazine being plugged at the moment which says it can teach you who to do it, and gives you some of the stuff too. I already have a few bits and can just about manage a foundtation chain, but I am utterly lost on the rest. The magazine I currently have (not one of the new ones) has patterns for baby clothes and toys as well as blankets, and I really want to give them a try.


I tried to knit Jack a blanket, but I am SO bad at knitting that in the end I just put it down. He'd be 21 before I made it useable! Still, I have got the squares and one day I'll show him! Crochet might be a bit more up my street and if I get the hang of it I'll make BOTH Jack and Squiggle a blanket each.