Can't believe how little time I have....

April 20, 2011
It seems like I blink now, and I miss a whole week. Or even a month! Life is just so busy at the moment that I simply don't seem to have time to sit down and write this thing. Which is a real shame because I know I'll want to look back at it in hte future to when Jack was 3 and Tom was less than 1 and there'll be next to nothing to read :o(

The last few weeks have been bonkers though. After Jack's birthday it all went down hill....

First off the kitchen cupboard fell off the wall onto my head, breaking pretty much all my glasses and scattering foot all over. The cupboard is now in the livingroom taking up too much space, and the kitchen is a bomb site since we have just lost 1/4 of our storage!

And then we all got struck with Gastric Flu which was pretty horrid! Jack got it first, on the Wed night he started bing sick. On Thu (when I should have been at working making up for not going in on Jack's birthday) I ended staying home because Mark was feeling rotten and there was no way he could have looked after the kids, esp Jack with still being sick, and had started at the other end too. After the weekend Jack & Mark started to get better, but on Tue (again, working to make up for the day I had missed TWICE) I wound up having to come home half way through the day and go to bed I was so ill. I pretty much stayed there until Thu afternoon. By then Tom was getting ill too, and thrn Mark got hit a second time! We should have been other to see my father-in-law that weekend too because it was his 60th..... but we missed it and were pretty gutted by it too.

Following weekend we made up for it by getting over the hills. It was Alex's party too so we had Sat at my mothter-in-laws with all the kiddies (all 6 boys and Meggie) and Sun with my father-in-law and family. And I wound up missing another day of work..... Not good. 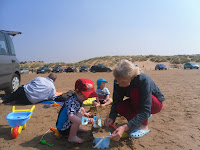 This week my dad's been over from France so we've seen a bit of him too. Yesterday (sadly while Mark was at work) we took the kids to Southport Sands. It's the first time Tom's been to the beach, 2nd time for Jack. They had a lovely time splashing in the sea and building sandcastles. Tom tried to eat a fist full of sand, and desided that it's not that tasty after all.

This weekend is Easter Weekend so we're off to my mum's. She's planned an easter egg hunt round the house and garden for the kiddies which should be tons of fun! I'll try to get some photos if I can, but my camera's a bit bust (the LCD has broken and I have no other view finder).

Work's starting to improve a bit too. Good news in that the boss begged me stay and has given me a nice office job with the hours and days I want, with the promise of commision on top of my wages (which I'll believe when I get it, but hey). Bad news is that he has moved me from my nice spot upstairs with Chang and the rest of Ops and IT and sat me with Accounts - right out side HIS office! Argh! Still, Tamlyn and Micheal are nice enough and there's nothing stopping me going up to Ops for lunch :o)

I'll try to write this a bit more often...