So sad that we couldn't use cameras during the show. I really wanted to record it. But we couldn't so here's the photos instead!

Jack was a King (or Wise Man as they were when I was a kid) and he was fab. Not many speaking roles for the reception class, no words for the kings, but they did have to dress up and walk round in front of a large crowd of folk - twice yesterday and once more today - and our Jack isn't great at dressing up, or walking calmly, or doing anything under instruction in front of an audience! He was  brilliant! Walked nicely with the other kings and the camels, gave his gift to the baby, and sang along the best he could. I'm a very very proud mummy.

Nice promotion for him too after last years total refusal to be a donkey! 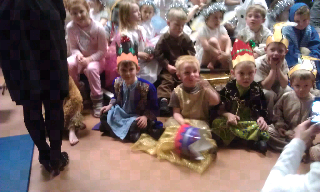