My biggest little man, so grown up!

He's been taking jujitsu lessons on a Tuesday after school for the last half term and seemed to have been really enjoying it. It's one thing he's wanted to do ever since he saw the kick boxing during the Olympics. He couldn't believe people were ALLOWED to hit and kick each other since its something I try to limit at home! So when the chance came up at school I asked if he wanted to give it a try and he said he did.

Sadly, this half term 2 of his friends dropped out. It is quite hard work and they are expected to achieve a certain level of discipline - not easy when you're only 4 or 5 years old. Yesterday he started saying he didn't want to go. I'm thinking its just because he's friends stopped or because the though he would miss out on something at home (we've borrowed an old He-Man DVD from a friend and he's loved watching cartoons mummy and daddy used to watch), mainly because he said it was because he "wanted to come home sooner". Now, I've paid for this half terms lessons and I can't get my money back, and like I said I don't think he really wants to quit as he is known for following the crowd.

Today I went to fetch him after his lesson and he was bouncing all over the place, saying he DIDN'T want to quit now (phew). I asked his instructor how he was doing. She said he'd been TEARFUL when he first got in! My heart broke... I felt I'd pushed him into going! But she continued by saying that he was fine very quickly and got on with it, and that he was doing BRILLIANTLY!

So on the way home I chatted with him about if he wanted to go or not, and that it would be so good for him because it means he can do all the things (fighting) that I can't let him do at home because its not safe, and he said he did. But I'm still mulling over these tears and worrying that he's feeling pressured by me to go. I couldn't let it go that I was pushing him, so again at bedtime, after his story and as I was tucking him in for the night, I asked how he felt about jujitsu, and why he'd cried. I said I felt bad that he'd cried, I didn't want him to be sad. He said "it's not your fault mummy, I just wanted to come home earlier. But I like jujitsu, I'm not going to quit EVER!"

I love the fact that he gave it another go without his friends, especially when he was clearly worried about it. I love the fact that he overcame his concerns and chose not to quit. And I'm deeply touched that he cared for my feelings enough to say " it's not your fault mummy" that had cried when I was convinced that it was.

With a bit of luck he'll stick with it. If he's still interested by the time the Grading comes up this summer we're going to get him the full kit. He wants it now..... But he still might change his mind! 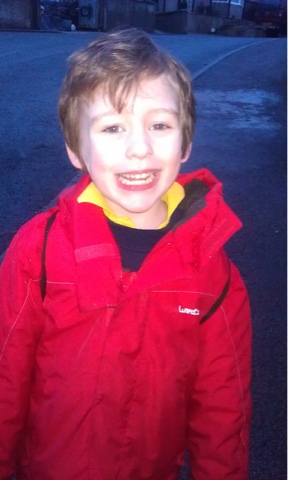