May 19, 2013
It's such a shame! Today is Jack's best mates birthday party. All my boys got invited and Tom was as excited as Jack.  It was a brilliant party with a bouncy castle, dance competitions and loads of party games.

But then there was George. He'd been a bit sick in the night.... We've put it down to how much of that home made pizza put away last night. He ate as much as his big brothers! He seemed perfectly happy and jolly and not at all poorly so we were sure he'd just over faced himself and that he would be fine.

5 mins into the party ad he was sick on me. Just a bit... It cleaned up quickly enough.

Food was served. Jack & Tom stuffed themselves! Georgie just had some juice, he had no interest in anything else. Then he went to sleep in my arms and I cuddled him while chatting to the other mums and dads. I thought about putting him his pram to sleep but decided to just snuggle instead.

Depending on how you look at it that was either a very good or very bad idea because minutes later he started to projectile vomit! All over me. Down my top, into my bra, everywhere.... I tried to mop us up the best I could with wipes and tissue paper but he was still going. And we STANK!

Birthday boys daddy came to the rescue. We'd walked to the party because its a nice day and we'd planned to go to the park afterwards, and he offered to drive us home so I didn't have to treck for half an hour coated in puke. Lucky for the bigger boys it was just about the end of the party. They got their party bags, said good bye, and got loaded into the car.

So now we're stuck at home on a sunny Sunday afternoon. Jack's playing on his DS, Tom's gone for a nap, and I'm sat with a very sad Georgie (and a towel, just in case) watching Cbeebies and hoping he might drift off for another snooze. 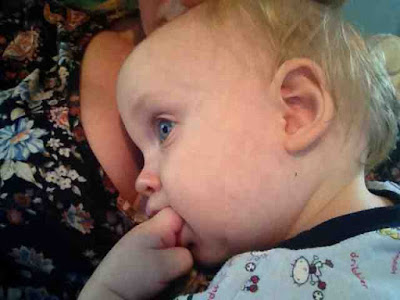