It's been a busy old day here! Our Big Lad Jack was off to a friends house after school, not the first time by a long shot, but this time he was staying out for his dinner. That's a first! I'm perfectly happy with him going out after school and the family he went with are smashing. My only worry was that today I had no mobile phone signal! (I've had an upgrade at it taken ALL DAY to get switched over, Grrr) so I felt cut off from him! But he was fine and behaved himself well enough.

The friends dad, however, did mention that Big Lad was now wearing a pair of his mates underpants..... It's been a scorching hot day and they were playing in the back garden with some water. Jack felt the need to strip out of his uniform and splash about in his boxers...

At least he had the sense not to wreck his school clothes! 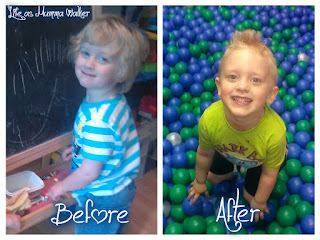 Blondie Tom has had a bit of a day of it too. As well as 4 days in a row being Clean & Dry (whoo potty training) he's had a MASSIVE hair cut! Can you believe these photos are only 5 days apart?

I have to admit I felt like crying as the lady took clippers to my Angels beautiful golden locks... but it's not the first hair cut he's had, and with it being so hot lately the poor boy has really suffered with the heat. His head has been sweating and his hair was getting matted. Plus there's been a threat of head lice in nursery so better safe than sorry. At least we'll be able to SEE if he gets them.

But the biggest and best news is for our Georgie Boo!

He took his first proper steps today! At 1yr, 2m, 1w and 2days old he took 5 wobbly steps from me to his dad totally unaided! We're SOOOOO proud! I wish I could have caught it on camera, but when I think about it, it's much more important to have been able to witness it first hand. There will be plenty of time to capture him running around. Only one time to smoother him in kisses and cuddles for doing it the first time!

I love these mile stones. I love seeing my babies grow into young boys. They mean the whole world to me!