One of THOSE days (erm, 2 days actually)

June 27, 2013
You know how it goes. You start the day with all the best intentions and it just all goes down the pan!

Well I've just had a couple of these says on the trot now and I'm not impressed with myself AT ALL! 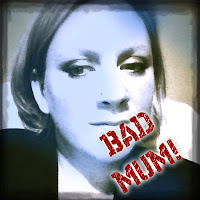 Yesterday was just stupid, plain and simple. Half an hour before school I remember that we've not done Big lad's reading book and it's due to got back. So I call him over, snuggle in and listen to him read the last half of his book, which he does beautifully. But now we're running late because it took longer than I thought. And it's Wednesday so Blondie is in nursery and he needs help with his shoes. I get the shoes on and go to pick up the lunch bags...... No lunches! Argh! How had I forgotten to make LUNCH!?

If it was just Jack then I could have winged it and paid for a school dinner for him. £2 down but not so late for school. Tom doesn't have that option. So I rush 2 lunches together and drag the kids out of the door. We're going to have to run. But then we bump into the lass from two doors down, her toddler, her baby in buggy, and her crutch. Toddler goes racing with my lads and almost straight across the busy road. His mum, with the pram and the crutch, can't chase after him or hold him back so we wait at the side of every road to keep him safe. The dutiful thing to do, but I can feel time ticking by.

Half way down the hill I notice a certain someone doesn't have his book bag..... Too late to go back for it back for it  now. Stupid book. Stupid me for forgetting about the stupid book, which lead to me forgetting to make the stupid lunches, making bump into the neighbour and save her kid from the stupid roads, making is us late.... stupid STUPID me!

After school Big Lads comes trotting out of his class with an untouched lunch. "Mummy, it was Wimbledon Dinner day today, remember, you paid for it last week!" DOH! Today was little better. And also my fault! Today school is closed. The teachers are on a one day strike. I promised them a wonderful day at Happy Mount Park! And it was raining. No way are they splodging around in mud all day and getting ill this close to the end of the school year. So I drag them off to the shops for the morning. To be fair, Big Lad was in urgent need of more school shoes (the last pair lasting a whole 3 days!!!!!!) and new trousers (only 1 in 4 pairs has no holes in the knees). The photo says it all I think.

What I hadn't told them was that I had a bad weather back up plan! A new (to us) in door play area! So after shopping and lunch I whisk them away for a surprise (clean and non-muddy) treat. I get to the right place, then drag the kids round in the rain and the mud looking for the right BUILDING. that takes more than 10 minutes. They are as soggy and grimy as they would have been at the park. Yay me.

They had a great time there. We met up with some friends and they went mad for 2 hours. I had a coffee. Just the one. But I think they must have quadrupled the caffeine in it. And this was my big mistake. I was as high as a kite when we left, and I had dinner to cook when I got in. Not just any dinner, my 4th Schwartz review. I should have known something was wrong in the first few minutes when I noticed I had photographed the wrong packet - crunchy bites not tikka massala. I only noticed after the photos, while I was reading the label out for the video. This should have been the time to stop and order take-away. But no, the the caffeine fuelled imbecile that I am, I carried on. 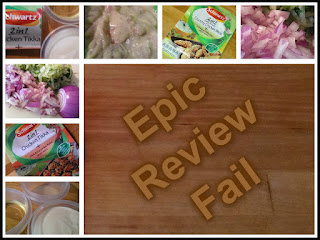 I measured everything out perfectly, taking photos and videos as I went, opened the Tikka mix and made the marinade for the chicken. I thought "that doesn't smell very spicy, hope it's not a duff one" and carried on. That SHOULD have been warning bell number 2. But I still carried on! Put the chicken in the fridge, put the side dishes on to cook, and then thought about making the raita dip. Again, perfect measurements... I videoed myself adding the raita packet into the yoghurt
... and thought "now THAT smells spicy! ...Wait...."

Yup! I had mixed the sachets up. My chicken was marinading in raita, and I'd just made tikka dip.

I'll be buying a new packet of Schwartz 2-in-1 chicken tikka.