The Station with Grandma Kate

June 15, 2013
We got a call from my Mother-in-law last night, could they come over to day and bring Tom's birthday present. They don't get to come over very often so it was nice of them to suggest it.

The only down side is that because they live so far away they don't get here until early afternoon and since we're going out to eat there's no point feeding the kids at lunch time. Only thing worse than hungry kids is over excited hungry kids! I try to distract them with dress-up, and playing with the blackboard & chalks. But it doesn't work. Tom's in and out of his costume, Jack's being a general pain, and Georgie eats the chalks. By the time Grandma Kate & Grandad Dave get here Jack & Tom are climbing the walls! Jack starts showing off and attention seeking, and gets worse when Tom gets his longed for Peppa Pig Rocket. Tom just gets giddy. Georgie had been put down for a power nap in the hope that he will eat instead of scream his way through the meal. First chance we get we wake him up, sort out the bigger two, and we're ready. We can't get out of the house fast enough!

However, with it being Saturday, The Station pub in Morecambe is PACKED! We just about find a couple of tables next to each other with enough room for all of us including a high chair. Jack & Tom are still hyper and have to be separated. This doesn't stop the giddiness though, it just adds Jack sulking to the mix. Meantime Georgie has seen some discarded Yorkshire Pudding on the floor and sets his heart in eating it! I manage to kick it out of his way before he does his usual trick of eating Floor Food (I'm certain now that this, mixed with chewing shoes and pram wheels, is why he's sick so often... typical 3rd child). We barely get chance to chat with Kate & Dave through the "sit down", "behave", "STOP BANGING THAT!" and assorted threats of time outs, missing out on the play area, and simply being taken home. Thankfully food soon arrives and almost instantly the kids are calm again. They eat up nicely and even get some pudding. 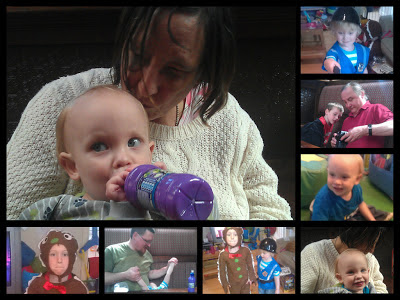 Finally we get into the play area... And it's almost wall-to-wall with folk. There's a party happening there too. I get some coffees in and let the bigger kids loose, but it's so busy and noisy that we can hardly hold a conversation over the roar. We daren't let Georgie loose, especially with him not walking yet. He'd have been trod into the ground! I do take him for a bit of a play but he's tired now, the power nap wasn't long enough.

Before we know it it's time to go. I've hardly had chance to chat at all, I hope that Hubby got chance to natter with him Mum a bit. I bribe the kids with a (very over priced) tub of sweets for the car if they get their gear together and get ready to go instantly. Amazing how that works every time! Hugs & kisses all round and we part company with the Grandparents, hoping to see them again soon. The kids, typically, are perfectly calm and well behaved for the rest of the afternoon/evening. When there is no audience. No one will ever believe how good they can be!