This was such a brilliant day!

The kids woke up unreasonably early but we had loads planned. We started off with a quick play on the site's play park before checking out the heated pool. None of the kids are swimmers (lessons are on my to-do list) and even Hubby isn't too happy in the water normally (I had to force him to buy & pack swim shorts for himself) but we had the pool to our selves until the last half hour. We'd brought armbands, a swim ring, and a baby float for Georgie, and all got in. There were pool noodles there to borrow too and we had so much fun splashing and paddling about. Me and Jack stayed longest and he's been promised swimming lessons as soon as I can organise some for him back home. 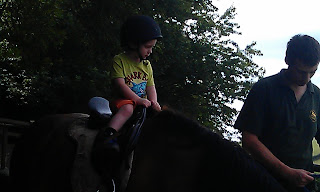 After lunch we drove across the island to Foel Farm Park. I'd planned to te them to Henblas working farm & adventure park but I've told been it's shut down. I was recommended to try Foel Farm Park because it was the closest thing, and I think they enjoyed this as much if not more than they would Henblas. 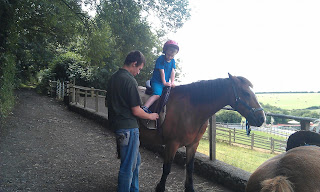 They got to pet baby bunnies, feed calves and lambs bottles of milk, feed animal chow to the pigs and goats. They took a tractor ride and fed a shire horse, played on a huge inflatable pillow! And best of all... They got to ride a pony! Tom's dream come true! All the better for it stopping mid ride to do a huge poo... Even Jack said it was better than the donkey ride he had last year at Blackpool. There was even a chocolate factory and shop, which I admit I quite liked. I might have paid over the odds for each of us to have a special animal shaped chocolate each (3 dinosaurs, a mouse and a frog) but even then it wasn't unreasonable. And it was very tasty! 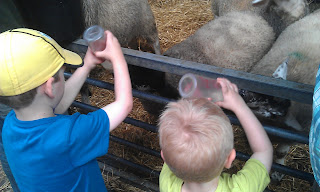 It was well worth the entry fee, £24 for the four of us (Georgie went free on account of still being a baby) and we spent an extra pound on two bags on animal feed, a bit on souvenirs from the gift shop and ice-creams on the way out. Considernig that once you're in everything else is free - like the tractor ride and pony rides - I think that's a great deal! The kids want to come back here next time we come to Angelsey and I've promised them we will. 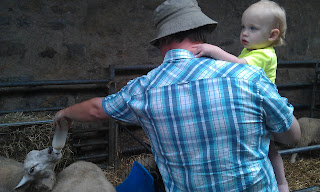 It wasn't over crowded either. They all got a chance to have a go at each feeding so no one was left out. It was well staffed so if you wanted something or had a question to ask, you were dealt with quickly and with a friendly smile. The animals are all clearly well looked after and happy.

I took 90 photos and video clips, and even then I missed a few I wish I'd captured. I'll have to share the best of them when I get home (maybe on Wordless Wednesday?)

We finished up the day with Chinese food and a few hands of Cardjitsu, and now the kids are tucked up in bed while we curl up with a few drinkies.

Gonna try for the beach and Sea Zoo tomorrow!

While I have presented this post as a review I was not asked to write it, or paid for it, or compensated in any way. I have posted it as a review because we all thought it was so lovely and think more people should know about it