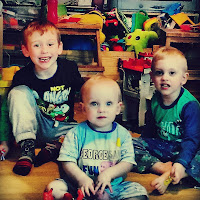 I mentioned more than once we have a small house for the number of people - and amount of stuff - that we make up. We're very much on top of one another and crowded with the kids things. Only having the one reception room ad housing the majority of the kids toys in it is the main reason for that! We could pack it all off upstairs but we like to watch them play, and to join in, and sending them to their room to play seems a little mean.

The living room looks like an explosion in a toy store by the end of most days with Georgie's walker and music table taking up most of the space, closely followed by the castle and bat-cave that the bigger boys own, and then there's usually an assortment of building blocks, construction toys, and books (100's of books!!!) taking up the rest of the floor space. Oh... and any clothes the kids have discarded through the course of the day.

By dinner time it all NEEDS to go away. Our dining table is in the living room, a drop leaf table that needs a clear floor to be put up and have chairs go round it (we might all live in the one room most of the day but damned if we're eating of our laps every night! I believe in sitting at a table to have our evening meal, eating properly and talking as a family, not staring at the idiot box). There is NO POINT tidying up before I start to cook because it will be a tip again by the time food is ready. So what do I do? I enlist the KIDS to do it! Their mess, their job! (such a mean mummy)

It works though.... I give them direction and they take it. Just asking them to tidy up causes a riot because they all want to pick up the one same thing. So I delegate jobs. "Jack, can you put all the big toys in the toy box please. Tom, you're good at finding bricks, can you put those away please" followed by asking Tom to collect all the books and put them away on the selves, Jack to find any clothes and put them in the basket, and so on. They start looking at it like a game. Who can finish their task first? Can they get it all done before they are sent for their hands washing? And then there's George. Only 15 months old and trying to help. He puts clothes in the basket, tidies bricks up, tries ever so hard to put books on the shelf. And his brothers help him and encourage him as much as we do. 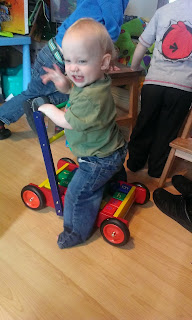 We try to teach our kids good habits that will help them in adult life even in just a small way. Putting things away when they're finished with, cleaning up before a meal, not leaving dirty clothes lying around, putting the lid down on the loo, helping each other out, sharing tasks. And I believe it's working because JACK TEACHES TOM what we've taught him, and JACK & TOM TEACH GEORGE.

Listening to Jack remind Tom to wash his hands after he's been to the toilet warms my heart, hearing Tom say "well done Georgie, good baby" when he's helped tidy some toys up puts a massive smile on my face. It's coming so naturally to them to help, encourage and teach each other.

I don't have any brothers or sisters so I've never experienced anything like this before. Maybe I'm making a big deal out of nothing. But to me this is wonderful and lets me think that sometimes we do this parenting thing right.