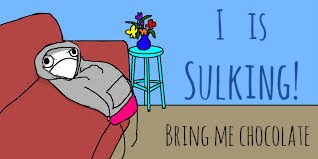 To say I am fed up would be an understatement. I am sulking on an epic level! I'm not a girl to cross right now as I am libel to bite off the head of anyone who even looks at me funny. I hoping that's a hormonal thing and that it will pass because I'll end up locked away in the nut house if it goes on much longer.... OK. Maybe a slight exaggeration, but I am sulking.

Today is cycle day 40! Aunt Flow is a NO SHOW and I am NOT pregnant.

Yesterday I made a call to my docs and asked if I could have a telephone appointment since my 21 day blood test seems to have suggested that I ovulated and yet here I am 20 days later with nothing to show for it either way. It took a few hours for the lovely lady on reception to call me back and say that the doc would prefer to see me in person. She made me an appointment for this Wednesday morning.

I half expected AF to show up no sooner than the appointment was booked but still nothing.

Right now I am assuming that my body tried to ovulate - hence the +OPK and blood test, but then failed to actually do it. This usually means that it tries again a week or two later, but I've had no sign that this is the case. A few folk have suggested other dates and when I've tested them out on my chart it looks plausible for pregnancy testing on CD44 - which happens to be the day of my appointment. Although I score a "low" on the likelihood to get pregnant from an ovulation on that date so I'm not building any hopes up  for that. And Aunt Flow would already be late now and the tests are still negative.

I'm going to ask again for Clomid when I see her on Wed. It's my own doctor this time (I think) and I'll use my best persuasive arguments such as "I've used it sensibly and successfully before" and HOPE HOPE HOPE she'll take pity on me.