September 25, 2013
I've been a bit quiet lately. I've been a bit stressed.... I thought that with Jack going back to school and Tom starting nursery things would be a bit calmer then the crazy busy summer we had, but it's just NOT! Tom is being very difficult right now. Not with going to nursery, that's all fine! But at home he's being really hard work and winding Jack up. And Jack hasn't got the good sense to ignore him so it escalates into a full blown screaming match!

Going to work has always been a bit of a haven for me. Seriously. I like my work and I like the people I work with. I've also really liked the office we've been using this last 2 - 3 years, a massive improvement on the dump we started out at. It's only 5 mins from home, close to town and tasty places for lunch, loads of natural light (which I need for my SAD), and it's a managed building which takes a lot of the stress out of things. But now we've moved..... Moving is stressful. Especially when you don't want to go. 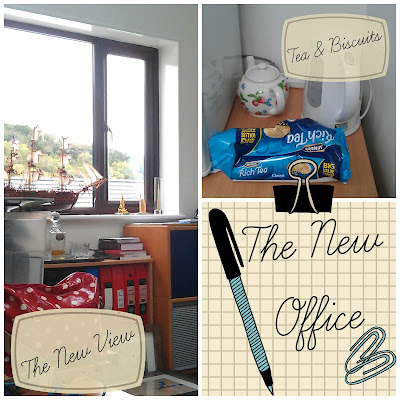 The new place is nice enough. It's a bit out in the middle of no where. There's no kitchen, and the one toilet opens right into the office (so if you need a "number 2" it's off to the warehouse toilet for you!). There's no internet yet, and only one phone line for the 5 fixed desks and hot-desk to share. But that's supposed to be sorted by the end of the month. The server has also conked out, so no one can access the vast majority of files and such that we need. I'd always keep mine on my desk top but when my PC's motherboard died earlier this month I moved them to the server to keep them safe. Doh... The IT guy has been in all day today trying to sort it, and he has to be back tomorrow to carry on. Oh, and this morning the water heater burst too.

But other than that.... It's ok. The view out of the window from my desk is pretty enough. Not quite as interesting as looking out over the Quay like at the last place, but at least I can watch the leaves change colour this Autumn. When I turn round and look though the door I can see cows in the fields! The skylights let in loads of light too, back end of September and we didn't need any electric light on at all today!

We're all in the one room too, which is cozy. For the most part we all get along, but it's a big noisy for using the phones. The Boss wants to put some divisions up, but the rest of us don't think it's necessary. Maybe we can talk him round. Or just let him box himself in and leave the rest of us free if he needs privacy. He IS the Boss after all.

And now that I'm settled in with my photo of the kids, my Cath Kidston cup & tea pot, and collection of toys (gift from my kids), and all my other bits and bobs, I'm starting to feel a bit happier. And a little bit less stressed.