I have been planning today for some time. In fact, I wrote most of this post a few days ago so that it would not interfere with the actual day (although since Skylanders is a two player game and at least 3 of us want to play at any one time I will no doubt wind up on here waiting for my "turn"). We are SO in to Skylanders.

Today is the day that Swap Force finally got released in the UK. It's been the hot topic of conversation in this house for weeks, months even, but this week we've been counting the sleeps until Swap Force. And today we  have..... 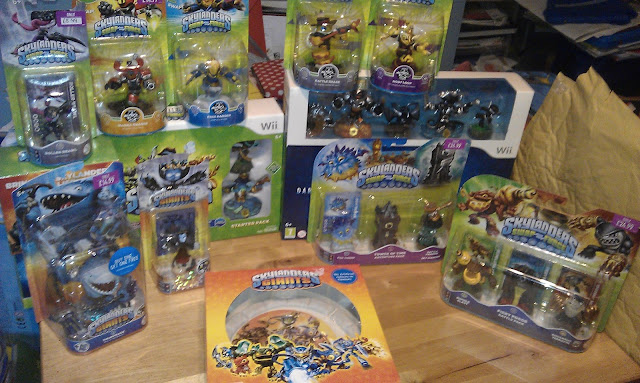 I promised the kids a little Skylanders party today, just for the 5 of us. I've been and bought a Skylanders cake from the supermarket (while scouting round for good prices on Swap Force figures) and ordered a pizza delivery for dinner. I've even bought some fizzy pop just to really push the boat out and let the kids go totally mental!

So we have a weekend of gaming ahead of us. I doubt we'll answer the phone or door to anyone (other than the pizza man) and will likely stay in our PJs for most of it too. The kids will stay up late and get over tired and bicker with each other, and us. But for the most part we'll have fun. After all, it's not often that we get a great new family treat like this. A nice early night on Sunday will see us all right for the week ahead.

Here's hoping they release a new wave of characters in time for Christmas, it would solve a lot of present buying issues!