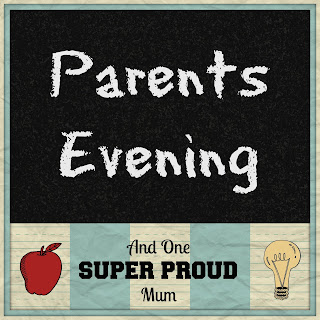 I used to dread parents evening when I was a kid. I wasn't a bad pupil, but I got an endless list of "could do better" reports saying that if I just applied myself I could do so much more. But I've never had that much ambition so I was happy to coast along with an average grade in an average school and happily met my average needs.

Jack is nothing like me. Jack wants to achieve. Jack LOVES school! One day when I was talking to him about school he told me he wanted to do really well in school so that he could get a really good, fun, and interesting job when he grows up. All credit to him! I'll support him all the way.

I got to the school 15 mins early for my slot because I went straight from work, and I was just about to start looking though his literacy book - the class's books had been left out for the parents to look at while they were waiting - when his teacher popped out of class and said she was glad I was nice and early, would I like to come right through. We spent ages looking through his book together - I hadn't realised just how much his writing and drawling has come on. It's not something he has much interest in doing at home. I could easily read what he's written!

Then we moved on to his reading.... She used the words "gifted" and "talented" with his reading, which just makes me beam with pride. He's has always been into his books from a very early age, and we've encourage him all the way with it. They use the Oxford Reading Tree books at his school and he is currently reading Stage 10 books, which are aimed at 7 years olds. He is reading them with confidence and understanding the words and stories. He's 5 years and 7 months old.

She talked about his maths skills too and said he already had a good grasp of addition and subtraction, and that she would be starting multiplication with him by the end of the school year. Numbers are something else he's always been good with, being able to recognise and point out numbers up to 10 before he could speak.

I was a little worried about hat she might have to say about his behaviour since he's been on something of a mission to wind his dad up lately, and he has a tenancy to get bored easily which then leads to him being giddy and silly to the point of being downright naughty. He has been a bit giddy in school - but no more or less the other kids - which just confirms our thoughts that he acts up at home from lack of suitable stimulation! I asked his teacher if she recommended anything and she thinks he would benefit from added responsibly at home, like certain jobs that were his; setting the table, clearing up his and his brothers plates after a meal etc. I might let him be "in charge" of feeding our cat too.... We both agreed he would probably get a lot out of doing some more cooking with me which would keep him busy, give him recipes to read and instructions to follow, measurements for number work, and it's something he enjoys - he still wants to run his own pizza restaurant when he grows up!

All in all I am incredibly happy with what she had to say abut him. He is an awesome kid, and already far smarter than his mummy. WELL DONE BIG LAD!