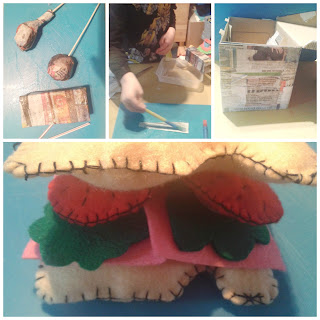 This week we've been putting some more work into Jack's play-food lunch box!

The felt sandwich is finished! Jack found this a bit tricky, I think we aimed a little high with this idea because it took a long time and Jack lost interest quite quickly. But he gave the sewing a good try and really enjoyed stuffing the shapes with cotton wool! I think

George was most impressed with it though because he's been playing with it for ages, taking it apart, pretending to eat it, and putting it back together again. I think I might make some more of these just for him to play with!

We've made a start on the lunch box, which is a soap power box that we covered in aper and glue so we can paint it next week. It's just the right size for the sandwich and other things we want to pop in there.

The paper and glue was something of a theme this week with a chicken drumstick & apple made of foil & wrapped in papier mache, and carton of fruit juice getting washed out taped up and covered too. They are now drying out so that they can be painted! Jack's really looking forward to that!

NEXT! I think Jack needs to focus on some of the reading and writing tasks next, as well and painting our fake-food. We still have our paint/glue/food mixes to make! Gooey gooey messy fun!!!!!!