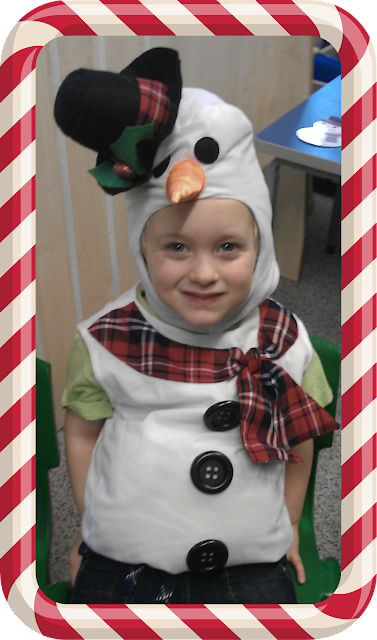 Today is the Nursery's Christmas Show! Tom has been very excited about this and has been singing his heart
out when ever I've played my Christmas CD or YouTube Christmas playlist.

A couple of years ago when it was Jack's turn I got to video the whole thing (it's only short since they are 3 & 4 years old, and the script is the same every year) but this year we weren't allowed to as some of the kids parents had declined the photography bit of the nursery contract (understandable, but still upsetting), so instead we were allowed to take a photo of our own child at the end.

It's such a shame because Tom was a SUPER STAR!

He played a Snowman. He'd told me he was going to be a Christmas Tree, but this part was much better! The Snowmen got to sing a duet! "I'm a Little Snowman" to the tune of  "I'm a Little Tea Pot" Which he did beautifully!

He knew all the words to all the songs, he knew all the actions, he took a bow at the end of every song, and he smiled and smiled all the way through!

I have never been more proud of my Blondie! One talented kid