January 30, 2014
There are some great advantages to me and the Hubby both working part time and sharing both the working and the parenting roles. It's also a huge advantage that we only need someone other than ourselves to mind the kids one day a week, and that it's my mum who volunteers to do it.

There are also some disadvantages to me not being the only person to pick the kids up from school. For example; receiving letters from school. Or, more to the point, NOT receiving them. When 3 different people pick up the kids the letters seem to go missing. Even though we have a noticeboard where they are all supposed to be kept.

To be fair to the school they are pretty good and the vast majority of important information is texted out to parents too. I am the one who gets these messages in our family. But not everything gets texted.

Last night as we were having our dinner Jack got up to go to the loo. As he passed the livingroom door he paused and looked at the stuff (way too much of it) what was hanging on the door handle It was where we'd kept last years new Halloween costumes up to the day. "Muuuum, can I wear my Mummy costume for Spooky Dressing Up Day tomorrow?" 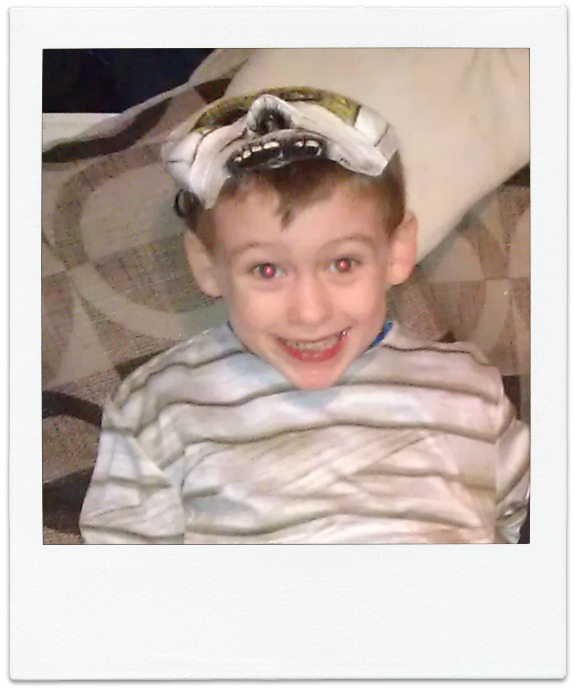 I stopped in my tracks. Spooky Dressing Up Day? Tomorrow? What? Why had I not heard of this before 5.30pm the night before? Jack tells me that it's all to do with Spooky Book week at school. This I knew about, but only because there were loads of posters all round the school. I'd had a slip to sign for a trip to the library in town and handed his library card to his teacher earlier in the week. Hubby had been to the book stall with them and bought them all a new book each. But a dressing up day? This was all brand new news.

I quizzed Jack further - after he'd been to the toilet - and he looked at me and said in an exasperated tone "We have to dress up for the special assembly tomorrow Mummy!". Oooh, so that's why we've been asked to practice that song then! OK. Fair enough. "Are you coming to the assembly Mummy?" Aww crap.... it's way too late to ask for time off work. And I would have loved to go, see him in a costume, listen to him sing.... Why the hell didn't I know about this???

So I get on Facebook and start beating the drums. Did the others mums and dads know about any of this? Can they give me any more details than Jack had? Turns out there had been a letter detailing EVERYTHING for Spooky Reading Week, and I hadn't seen it. I asked Hubby about it, and he hadn't seen it either. So where on earth was it???

Thankfully, disaster was averted. We found the Mummy costume and he went to school dressed up. Assembly was done and he sang with his class, but I missed it (although according to some of the other mums I spoke to afterwards it wasn't a big special do like the Christmas show, just the one song). I am just very very grateful that the costume was something I could drag out of the dressing up box - and not something to MAKE like the astronaut costume from earlier in the year. Jack is disappointed that I didn't come and see him though. I explained that I hadn't known about it soon enough or I would have gone, and asked that from now on - no matter who picks him up from school - could he please give any and all letters to me.