January 19, 2014
Sooo..... the Hubby has taken it upon himself to resume with the bathroom! This can only be a good thing. It is loooooooong over due! But I'm not having a go, I know he gets things done in his own time (even if he ever actually finishes anything, hee hee).

It's his week in work so so he only has today (Sunday) off to get anything done and since we do now have the floorboards that we have needed since 2003 he thought today would be the day to get things done! Which means we need to get out of his way.

I packed the kids up and did a couple of bits locally (popped into Asda and what have you, treated them to a McDonald's lunch), and then drive down to Old Holly Farm. I'm sure you all know how much we LOVE Old Holly Farm! If you're local in Lancashire, or just passing through, you need to call in here. It's not just for the kiddies either! The Cafe is lovely and the shop is very sweet (not to mention the ice cream is to die for!) 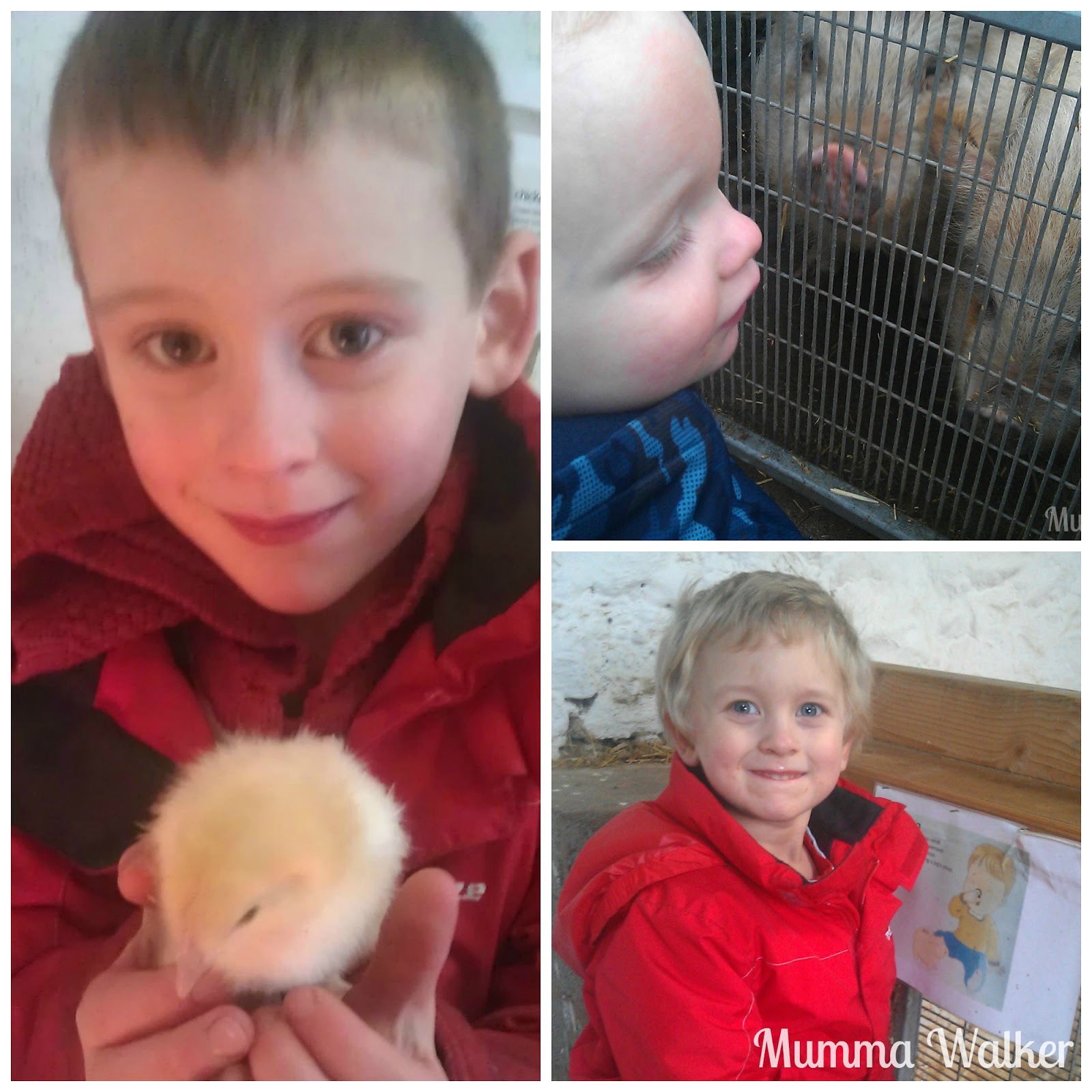 First port of call for us is always the calves. Jack simply LOVES feeding them! And we must have timed it well today because they were ready for a feed! Tom had a bit of a wobble - today was an "I don't like animals" day (you never know which way he's going to go until you get him there) and refused to join in. Georgie gave it a good go, although it may have been a mistake washing his hair with strawberry shampoo this morning though as several of the calves licked his hair... and one got a huge gob of snot tight on his forehead! Utterly gross! Jack thought it was the funniest thing in the world though.

We went to have a good look at the donkeys and the goats, Tom did try to feed a goat by lobbing bits of straw at it. The goat was unimpressed which sent Tom into a sulk. Jack was itching to go and see the chicks again though. He adores those chicks. It's becoming a standard Jack-Photo, him holding a chick with a very proud smile on his face. And he is ever so gentle with them too! Georgie tries to copy, but I can't help but worry he's going to be too rough with the delicate little things! I wont let him hold one yet, but he does stroke them gently. Tom just wanted to play with the wash station...

Next is the pigs! To George ALL pigs are Peppa! And he just loves watching them and snorting at them! Tom was finally impressed with something; he climbed up on a ledge by himself (see proud face photo) and found AND EMPTY PIG STY! The pigs were all outside getting snorted at by George!

As much as the kids love to see the animals, on a cold wet Sunday on January there is one thing they are very very fond of. The Play Barn! We get a family ticket for £10, and a few drinks and snacks from the cafe, and then they can run wild for a bit while I put my feet up, enjoy a latte, and relax. I hardly saw Jack & Tom for two hours! The occasional "Mummy! Look!" as they waved at my from high up places, and screech and cackle and they charged past me at mack 5, and the sudden materialising next to me to gulp down some juice, bite on a snack, and whooooosh! Off again! George stays a little closer to me still, but he is getting more adventurous now too. He loves to ride on the little tractors, and has discovered that he can climb the first level of the Play Barn and slide down into a ball pool. He even made a few friends with other kids! 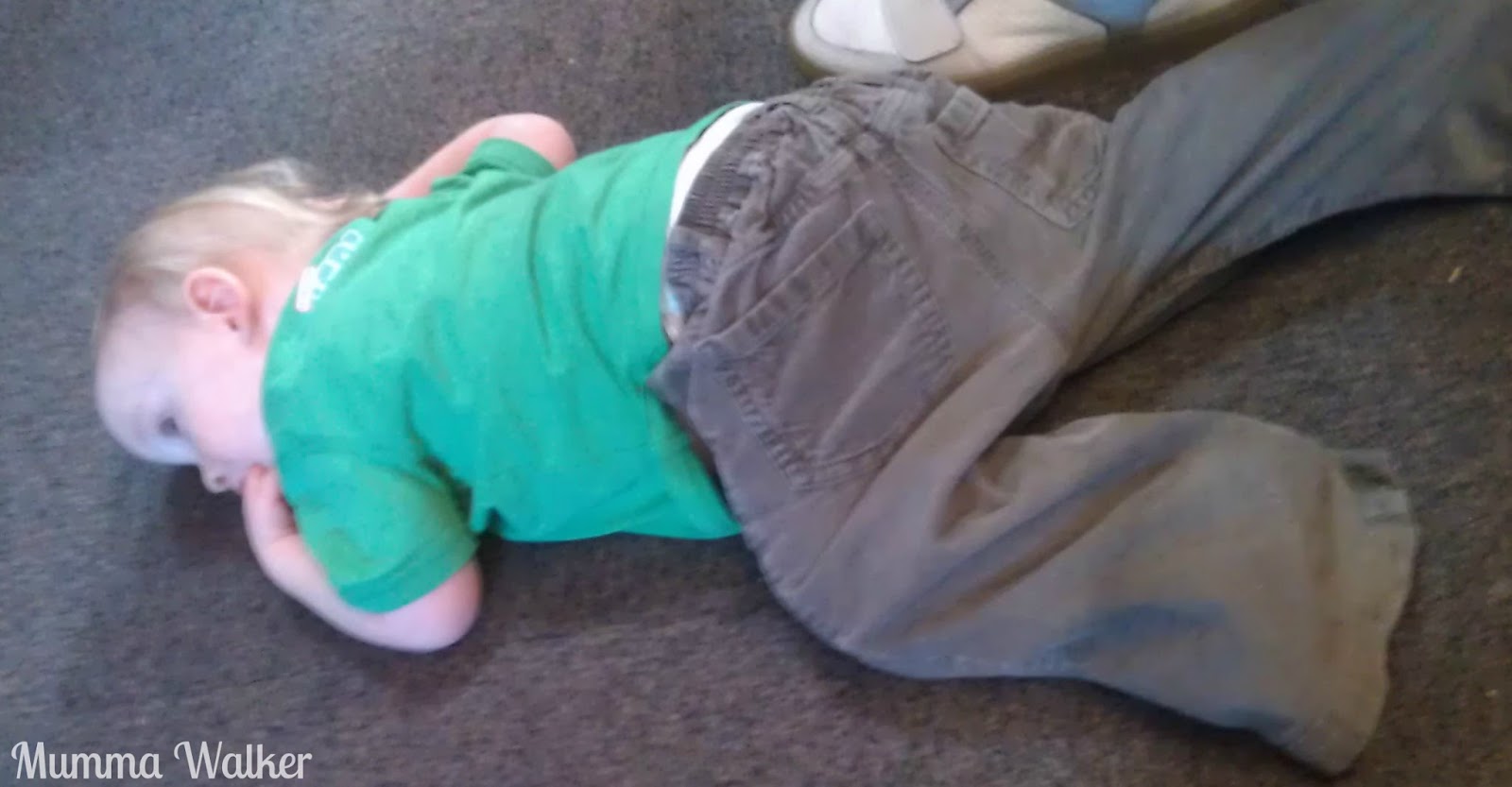 Eventually it all got a bit much for the poor wee fella though and he crashed out on the floor between me and the next parent along. It's hard work trying to keep up with your bigger brothers, especially when you're not even two years old yet! I guess that meant it was time to go home! So I gathered all the kids up, make a trek to the loo, and picked up some very handy loyalty cards on the way out (8th visit free!)

Having had the whole day out I was hoping that we would be coming back to a job well done re the bathroom. I put a quick call in to Hubby on route (hands free, don't worry) and he said we COULD COME HOME! But that there was no bathroom or landing floor, no toilet or sink in the bathroom, and no water. So we drove the loooooong way home and stopped off at the local Chinese Takeaway before finally having no where else to go and sneaking back in. 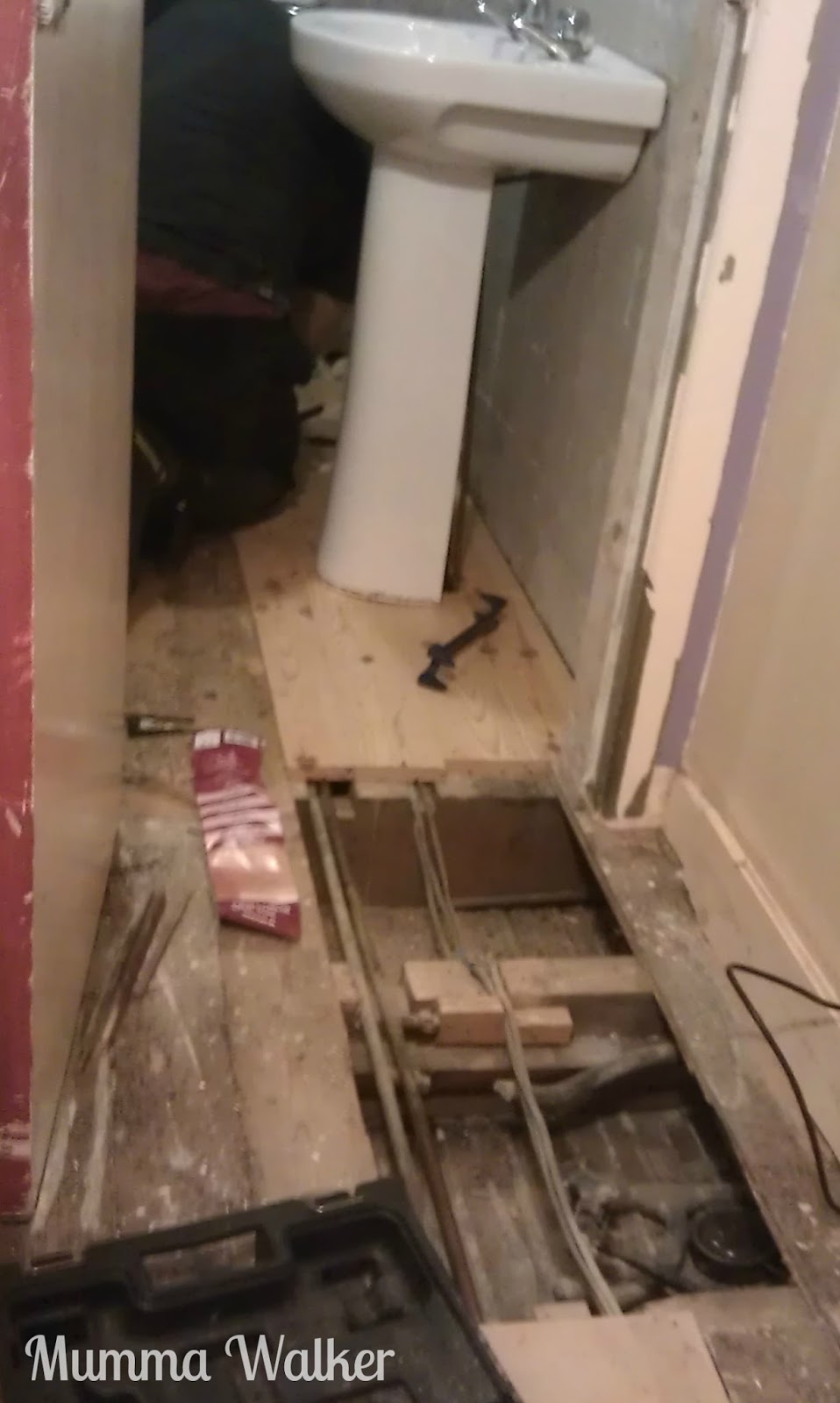 To be fair to the bloke he was a lot further on than when I had called him and he carried on working as soon as we had scoffed our take-away. By the time we were packing the kids off to bed (all be it a bit late) the toilet and sink were back in place and almost all of the floor was back down / replaced. Although we were told not to flush the loo as it would leak if we did. Naturally Jack - the first one to use the toilet - did a massive stinky poo which ponged out the whole house! And there was nothing we could do until morning! (Gas mask time!) But no situation is ever perfect.

Hubby is in pain now though. he says he has used - and strained - muscles he didn't even know he had! And he has a nasty cut in his ear where he bashed his head on the bathroom cabinet. He has been working where the sink usually is and stood up, forgetting that he hadn't taken the cabinet off the wall! Ouchie! Rather glad the kids weren't home for the colourful language that would have accompanied that! He can't even have a nice long soothing bath coz all his tools and gear are in it!