April 11, 2014
We've never really done much for our kids 2nd birthdays. No party for example. Not because we're mean.... but because there seems little point. The 1st birthday is a big do, family coming over from all over and such. And by the time they are 3 they have a few little friends they can invite to something that they've met through nursery and play group etc. But at 2 years old there's not much going on socially - they are still the centre of their own little uiniverse. So we do something low key.

For Georgie's birthday - since it's in the Easter Holidays this year - I took the kids to the indoor play centre in town called The Zone. We met up with a friend of mine and her two lads - both a bit older than my boys - and just let the kids play while we had a catch up over some lunch. 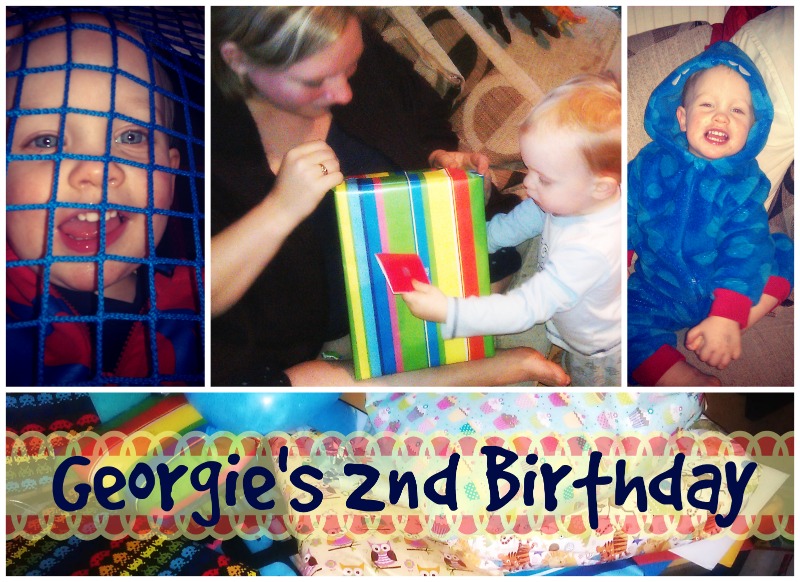 George got the chance to go and play with the bigger kids for the first time instead of  being confined to the toddler area. It's not recommended that he goes in with the big kids at his age, but it's not banned either (case of  "you know the risks, don't take us to court if you kids gets knocked over by someone bigger") and it made him so happy to go with his big brothers. He could only go so far anyway, not being tall enough to make the climb to the very top so I was happy that he was safe from getting stuck or lost in the massive climbing frame.

He loved his presents this year. We were stuck on what to get for him - being the (current) youngest of 3 kids close in age - we already have pretty much everything a two year old could want! But I'd sat with him and the Amazon App and let him browse things and choose what he wanted, then I bought some of the more suitable stuff from his list. He was very happy with it though, and that's what counts.

We also ordered his take-away of choice for dinner, or at least as best as we could. He likes noodles and he like chicken and he likes dipping sauces. So we ordered Chinese food and I shared some sweet'n'sour chicken balls with him, and some special chow mein.

He was still singing "Happy Birthday" at bedtime.