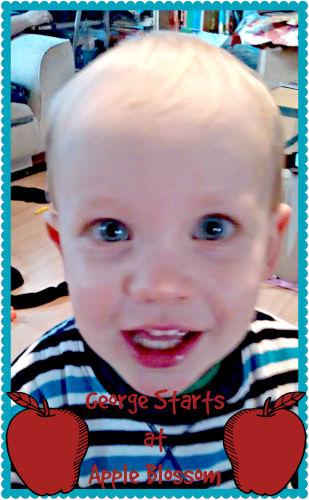 I admit I have been very nervous about this. George is such a mummy's lad. He's all snuggles and cuddles and loves for me, comes bursting into our bedroom and launches himself at me every morning, cries when I go to work, and knocks me off my feet with loves when I get home.

How was he ever going to cope with being left at nursery?

Well.... shows how much I know. First off, when I dropped Tom off at his nursery (only the next room to George's, they'll have lunch together) George shot in thinking that's where he was going too, and had to be dragged out crying! He sulked with me the whole time we dropped Jack off at school because he thought I'd lied about him going to nursery that day!

We went for the morning, the two of us. The idea being that I sit with him (or just in the same room) while he gets to know the place, the toys, the other kids, the staff. And slowly get him accustomed to the new place and people. Then slowly remove myself, perhaps over a few sessions. We did this with Tom and it was a total nightmare. He screamed, cried, carried on, broke my heart every time I tried to edge towards the door (unlike Jack who had run off to play with all the kids and toys on his first induction day at big nursery and never looked back).

He took to the place straight away. Made a friend within 5 mins. Built sandcastles, played with pirates and ships, played music, made pictures, shared his snack with his new friend. All without hardly taking a glance at me. I slipped out after an hour knowing Hubby would be passing shortly on his way to work. I filled him in on how well George was doing and then then went back. He had hardly noticed I'd gone - they said he looked round a couple of times as though wondering where I was - he certainly didn't cry. An hour later I left again to go and fetch the car from home so we could go shopping after his session. Again he didn't notice or care. He was far too busy playing with the toys and exploring the outside area. When I got back I had to bribe him out of the place with the promise of lunch at the cafe AND chocolate in the car!

So.... I think on Wednesday I'll try leaving him for the day. I'll stay with him for a bit first thing to make sure he's settled but then I'll go. I'm only 5 mins walk away if he gets upset. But I am confident now that he is more like Jack than Tom and will settle in quickly and happily. It's going to be "mummy who?" at drop-off time!