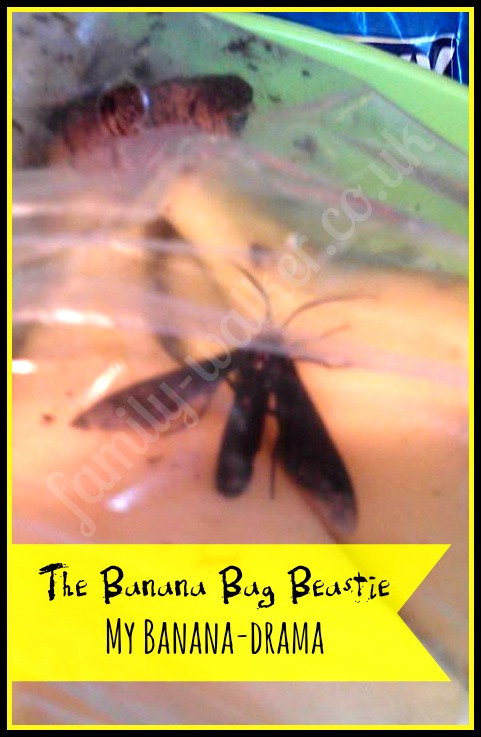 Been an odd one today.... had my usual Asda delivery this morning and wound up with a little more then I expected in the form on a winged thingumy in my bananas! Didn't half make me jump! I was about to rip open the bag when I saw it move. I let out a massive "EWWWW!" My brain translated it as SPIDER! But it was more likely to be something the spider would have eaten. Still no way I was opening the bag though, and as it was clearly very much alive I'm guessing it didn't have wings when it set off from it's homeland how ever many miles away that was. I didn't fancy playing banana roulette trying to work out which fruit it hatched out of!

Naturally the first thing I did was take a photo and facebook it. Than I called hubby and basically went "Wahhh! What do I do with it??" bare in mind he is phobic about anything buggy and wingy. He said I should ring the store and they would likely send someone out to take it away - based on him working at Sainsbury's and that's what they do if anything nasty turns up in the produce in store.

So I called Asda and spoke to customer services, whose response was "Eww!" Yeah... I'd established that :lol: Their produce manager was out till 1pm, she'd call me back. And she did. I explained again and she said "Eww! Chuck it in the bin and then come to store for a refund!" Bin? What about the guys in the hazmat suits and over sized butterfly nets? Then the penny dropped that it was a home delivery and she said I should call them instead. So I did. Guess what the woman on the phone said? "Eww!" (Seriously... It's like all my conversations today have been hashtagged.) She continued with: "Throw it away! We'll refund you now and send you an e-voucher off your next shop!"

So there was no exciting buzz of science as people gapped in awe at this hitch hiker, but I did get my money back and some cash off my next shop (wasn't looking for that but wont say no). And the fun of leaving the offending bag by the bin for Hubby to deal with when he got home - coz I'm evil like that. He kept asking if it was likely to chew though the plastic bag, then noticed the ventilation holes on the bag. It is now double bagged in carriers and dumped in the big bin outside!

So it's all good.

I've gone right off bananas though.

(for the record, I do not blame Asda for the bug in my bananas and the customer service was acceptable)