Does my diet affect my kids? 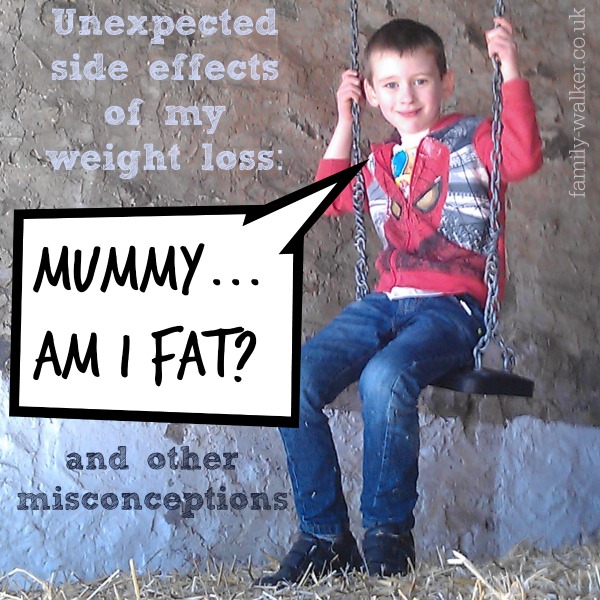 I'd love to know if anyone else has experience of this. Me and the Hubby talk about our diet quite a lot. We're frequently checking the points value of this and that, wondering if we can "afford" a treat, and marvelling over how we are steadily shrinking each week as we weigh ourselves. So I guess it's no surprise that the kids are picking up on it.

A week or two back Jack was getting worried because the Wii Fit recorded him as being "at risk of overweight", although he isn't. In truth he had just grown taller and when we adjusted his hight to his new measurement he was back to "ideal". But it sparked a long conversation about weight gain and weight loss and he was asking some very grown up questions for a six year old.

I am a believer in "if they are old enough to ask they are old enough to know" so we talked about the dangers of being over weight, but also about how he needs to not worry about his weight right now. I explained that his Daddy and I made sure we were giving him and his brothers healthy, balanced meals, and they got lots and lots of physical exercise. Luckily he understands a lot of that thanks to the healthy eating sessions they've had in school, which have led to more conversations at home too.

He asked why he was gaining weight, was he getting fat, and I explained that he was supposed to gain weight because he was still growing.  Gaining weight as he grows is normal and necessary. He was getting tall, not fat. It was a good thing.

Then he came out with this statement which scared me a little: "I don't think there's any such thing as too thin". OK... He's six and as no experience or knowledge of things like anorexia. But this is a concept I wanted to alter straight away. I explained that there defiantly WAS such a thing as too thin and it was as bad for you as being too fat, just as unhealthy and just as dangerous.

We explained that for adults it is important to be a healthy weight and to do that by eating healthy balanced meals, having treats in moderation, and keeping active. And for kids like him and his brothers the only important thing was to enjoy being a kid. Let us worry about the rest. We are, after all, giving him good habits without him even realising it as we cook "real" meals with plenty of veg, eat fruit throughout the day, and things like sweets and chocolates are are available but not over indulged in. They've been brought up like that, even when we adults binged on junk after the kids were in bed (I didn't tell him that bit).

I think we reassured him. He ate his Sunday dinner (boiled ham, roasted potatoes, steamed veg) and enjoyed a sweetie treat without fear or guilt before going off to play as normal. But I'll be a lot more careful how much I talk about my "diet & weight loss" in front of my kids from now on.