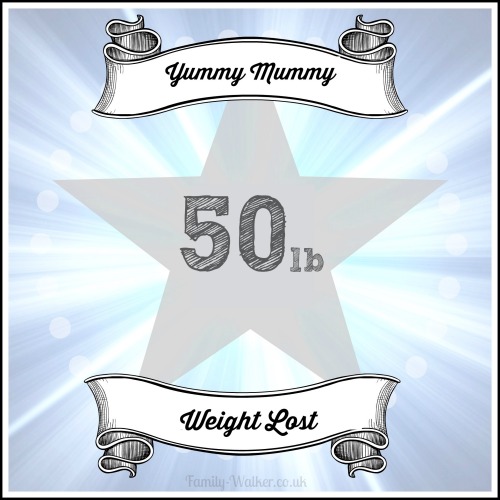 Oooh! What a week! It's not been the best of times in our house this week. Eldest child has been in trouble at school, and ill too so he was home for two days. Second child has a hacking cough which has kept him - and his brothers - up most nights. Third son has had a poorly tum & bum so he's been off nursery for two days too. And baby is teething. So we've all been tired and stressed most of the week.

When I am tired and stressed I eat. And I don't nibble on carrots, I chow down on chocolate! I've stayed within my points all week, but it's not a habit I want to get back into. Especially after kicking my Nutella habit.

I've also missed out on almost all of my exercise. I've walked to town a couple of times (thanks to Hubby being home and able to mind the kids for a couple of hours), but I've not used the Wii Fit or Fitness Coach at all.... I've earned a few Active Points but not the 10 minimum I was planning to do over the week. I haven't felt able to prance about on the Wii when I've had poorly kids sprawled out on the settee. Maybe it's an excuse. Maybe it's a valid reason. Either way it didn't get done. I didn't even get all my steps in for the week.

But sometimes life takes over and there are things that cannot be helped. I just need to not let it stop me from carrying on. It's a new week. Baby will be teething for a good while yet and experience says that number two son's cough will be here for a while too, but the two who were poorly are better now and we can handle the rest. It's certainly not going to stop me from getting my exercise done this coming week.

So, this is where we stand this week... and I'm actually pretty impressed!