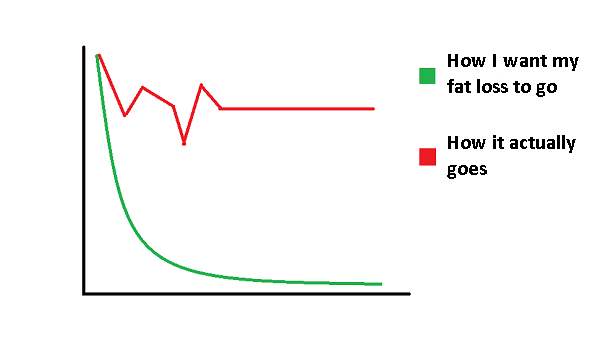 I am going nuts.... For the last few weeks I have been up a pound, down a pound, up a couple and down another.... and at the end of it I am almost back to where I was before Christmas. It's the dreaded "plateau". (With a slight incline in my case!)

Now, the reading that I have done suggests that natural weight loss plateaus do happen to people frequently, but when those people carry on with their healthy eating and exercise then it passes within around 3 weeks. I have been here for more like 6 weeks. So I think we can safely say that I am not suffering from a natural plateau. It must be something that I am not doing right.

I have been on this leg of my diet since September, so I'm in my 6th month. And I think I'm just getting slack. My mood has been low and that has taken a toll. But it's more than that... I'm bored maybe. Less inspired as the weight loss slowed - even though I knew it would. I'm pretty sure that's how Hubby feels too. We're not being as supportive of each other as we were 6 months ago, instead we are allowing each other to be "naughty", and then joining in.

In the last couple of weeks I have stopped recording my Weight Watchers points as quickly or as honestly, sometimes leaving it a day or two and then trying to remember what I had or guessing points values. As though I don't know any better! And when I'm not recording points I suddenly find myself nibbling on things that I shouldn't because "I have loads of points left". Only, I don't, do I?

In this six months I have lost more than half of my over all weight loss. It's been GREAT! And that is something I need to hold on to. I have less than a third to go.... less weight to lose now than I have already lost TWICE since before getting pregnant in 2013!

I am still using my FitBit, and getting my steps in. I'm about to increase my number of steps per day too on the basis that my 6000 per day have become "normal" now and I don't think they are as effective as they were. I'm upping to 7250 per day - which is around 3 miles instead of the 2.5 I have been aiming for.
As of today I am trying doubly hard to get back to tracking my food, and to not snacking between meals or at bedtime (even though it is now 9pm and the Hubs has just asked if I want anything from the kitchen. I asked for some sugar free juice, and watched as he walked by me with a huge bowl of cereal for himself - I want some too but I'll stick to my drink instead).
I need to look at my financial status and see if I can afford to join one of the local sports centres. I want to go to Gymaphobics, but there's no option for a swim there, and with the kids taking swimming lessons else where I might be able to get a family deal with one of the bigger (but more intimidating) gyms. With my return to work looming and the massive hit it will make on my walking I REALLY need to find an alternative! And I do miss swimming and using the gym, I haven't really done either since before I had kids (when I was 11 - 11.5 stone last).
This is not a natural plateau.... this is a state of mind and I NEED to sort it out!!!!