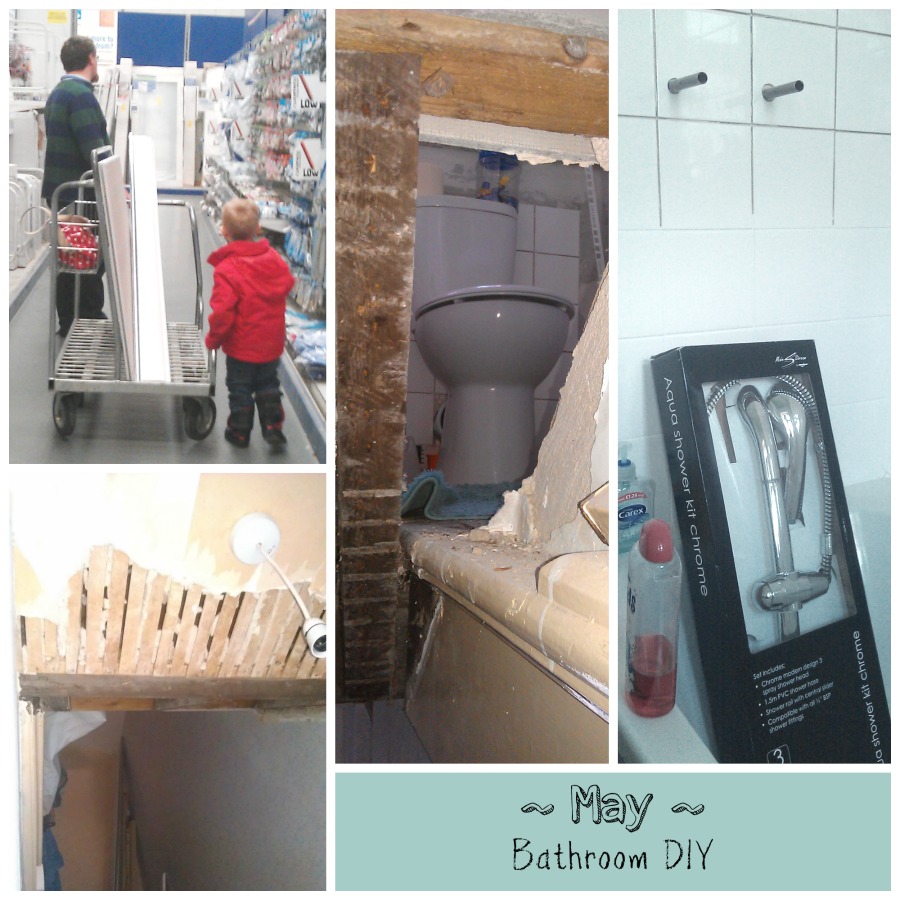 May is chock full of bank holidays! And Hubby hasn't been working for the first one... well, when I say "working" I mean he hasn't been out to his day job. Instead he has been beavering away at the ol' DIY again.

He has charged ahead with the tiling in the bathroom (which I haven't got a photo of yet, but I'll get one for later), and today he has had fun with the old Lath & Plaster which was part of the old bathroom wall (the one that came out last year) and consequently part of the ceiling for the stairs and over the front door. If you recall when it "rained inside the house" you'll understand that this is a job which has been on the list for a while (the livingroom ceiling will still need doing at some point).

So today has consisted of dropping Jack off at school and then dragging the other two lads to the tip, Wickes and B&Q. I dread to think how much the Hubs has spent. In truth I try not to think about it.... But that was the morning taken up. A quick bite of lunch at home and he was off and away on the DIY! New shower deposited in the bath tub to be installed another day, and out with the hammer and rubble sacks!

Much crashing, bashing, occasional swearing, and a good deal of dust later, he paused for a moments rest. Dripping with sweat (typically today has been lovely warm sunny day!) George went to see what Daddy had been doing. He gasped. "Oh noooo! Daddy! Naughty Daddy! Daddy MESS!" ... Daddy had a bit of a tidy up before carrying on with more ripping and trashing. However, there is now another gap in the floor/ceiling preventing any kind of privacy on the loo!

Luckily, today is the day that Jack is at Jujitsu so that granted him an extra hour and a half before anyone had to cross the threshold, I was under orders to give him a half hour warning so he could clean up before I went to fetch Big Lad from school. Which I did. With Jack home he carried on a bit until I had dinner ready, then a little longer until I needed to get the kids to bed...... and now the evening is drawing on and he's cleared out all the old stuff, and is taking advantage of the kid-free livingroom to measure up and cut new plaster board! He plans to get it on the stripped areas tomorrow morning while he is kid free (school & nursery claiming all three of them from 9am till at least 12.45), although I admit to being a little concerned how he will do the ceilings alone as I will be out at work too....... That said, and as much as I tease him, he does have a tendency to surprise me from time to time!